According to Stan Lee:

[…] in order to be a superhero, you need a power that is more exceptional than any power a normal human being could possess, and you need to use that power to accomplish good deeds.

Stan Lee is all but synonymous with the word “superhero” so if that’s his definition, it must be true right? But dig a little beneath the surface, and you’re going to find plenty of heroes defying the definition. 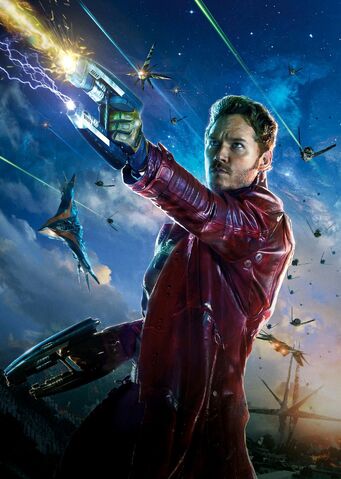 Setting aside the half-alien part, Peter Jason Quill does not have any magically enhanced abilities. I think there’s a serious case for him to end up on the Brilliant, but Lazy trope page. (Not an insult, by the way. Some of my favorite fictional characters make this list, such as Jake Peralta and Sterling Archer.) Especially as played by Chris Pratt, Peter can come across as someone who is not to be taken seriously. That could not be farther from the truth.

His skill set comes in being a master strategist and tactician. He’s a learner, an observer. He takes in what he sees around him and turns it into his advantage. He can take a situation that is completely stacked against him and still come out on top, because he can figure out what needs to be done and see it through.

The hero of the Tomb Raider franchise, Lara Croft is the most recognizable heroine in the world. No, really. She holds the Guinness World Record for “most recognized female video game character.” And that’s one world record more than I have.
Born to an upper-class family, Lara routinely makes the Forbes’ Fictional 15, an analysis of the net worth of various fictional characters . However, Lara has no interest in being part of aristocratic society. While the continuity of her backstory has about as many holes as a block of swiss cheese. The one consistent thread is her brilliant intellect and passion for archaeology. Lara she has trained to peak physical condition and mastery of hand-to-hand combat and marksmanship. Coupled with her intensive academic background

Arguably my favorite super-duo of all-time, Hawkeye and Hawkeye are the definition of badass normal. These expert markspeople are products of training, practice, and dedication to doing the right thing.

Clint Barton – depending on if the writer is paying attention to canon – is deaf, making him one of only a handful of disabled superheroes, as well. Although, I have to assume he does have some sort of rubber bones considering his remarkable ability to keep falling off of buildings and surviving. After running away from a foster home, Clint literally ran away with the circus, which is where he honed his acrobatics and his marksmanship.

Kate Bishop is just as deserving of respect for her abilities. Like Lara, Kate is another dissatisfied socialite who would rather donate money to hungry families than spend money on an extravagant wedding — something she chastises her older sister for. Even as a teenage girl, the skills she had gained from fencing and archery were so impressive that Captain America gave her the mantle of Hawkeye. (Granted, everyone thought Clint was dead at the time, except he wasn’t because… reasons. Comic book reasons. As you do.) Whether she’s off running her own Private Investigator business without a license, palling around with the Young Avengers, or cleaning up after Clint, Kate holds her own.

Sokka of the Southern Water Tribe

I’m taking a total genre leap here, but I wanted to show Sokka a little bit of love. He’s basically the Heart of the bender’s Captain Planet group. But even though he can’t manipulate the elements around him, Sokka manages to make himself a part of the team by being a proficient fighter.
Sokka began training as a warrior in his childhood, but was not yet of age when the warriors from his village left to fight the Fire Nation. He took it upon himself to build guard towers in the snow and attempt to train the other kids in the village to fight. His skills only increased as he continued on his travels with the Avatar. While he is young and still learning, Avatar: The Last Airbender establishes that he is well on his way to becoming an expert swordsman.
Considering he is only fifteen years old and manages to help take down the Fire Nation, I think he’s ahead of most kids his age.

Is this cheating? It kinda feels like its cheating. But it’s also true.

Dick Grayson, Barbara Gordon, Kate Kane, Jason Todd, Tim Drake, Cassandra Cain, and the list goes on. Sure, Bruce Wayne has more money than most of us will ever see in our lifetimes. And with money comes really awesome gadgets. (Did I get that quote right?) Scroll through their wiki pages and you find the same abilities over and over — Hand-to-hand combat, martial arts, marksmanship, peak human conditioning, acrobats, investigation, genius level intellect, swordsmanship, etc…

So, basically, the Bat Family is a family of training, dedication, and consistency and who wouldn’t want to be a part of that family?

Eli skirts the list a little bit on the grounds that he has super-strength. But he’s going up here anyway.

Patriot breaks onto the page with a team of teenage Avenger knock-offs which the press dubs the Young Avengers. From the moment we meet him, he is very adamant about one thing – protecting the legacy of his grandfather, Isaiah Bradley – the black Captain America.

Isaiah was one of very few African-American soldiers to survive a round of experiments to recreate Erskine’s serum after Steve Rogers’s apparent death in 1945. Despite becoming a war hero and destroying a nazi death camp, Isaiah was immediately court-martialed upon his return and sentenced to life in prison for theft of the Captain America suit. Even from a young age, Eli rebelled against the injustice—dedicating himself to preserving his grandfather’s legacy. He donned his own suit, saying the serum ran through his veins.

Except, that wasn’t exactly true. Eli’s mother had been conceived before Isaiah had been subjected to the experimentation that turned him into Captain America. Eli’s strength came from illegal mutant growth hormone injections (say no to steroids, kids!), up until the point when he took a bullet for Steve Rogers, requiring a blood transfusion.

Hey Marvel, how about an Eli Bradley and America Chavez book?–

And that is really what it all boils down to.

No one on this list was handed their abilities. They were not born with some sort of innate gift. No alien DNA. No gamma radiation.

They all made a choice.

They chose to pursue excellence, to overcome odds, to be more than the others around them. It is a very real choice, one that we all can make. If these are superheroes, then why aren’t we?

We’ve only got one shot in this world – so what life do you want?

Let me know in the comments which superhero inspires you!